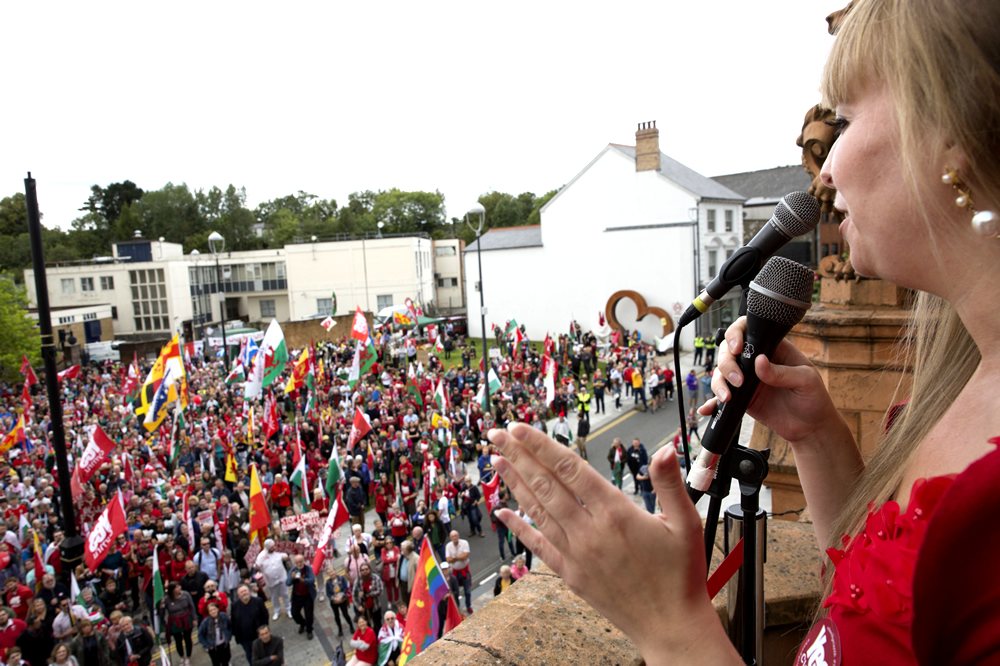 I can’t tell you how exciting it is to see this many people here in Merthyr, calling for independence.

I grew up in these valleys, and ever since I was a teenager I’ve known that Wales would one day be an independent nation. But the events of the past years, months, even weeks have led to a rumbling – a growing crescendo of realisation – that that time has to be now.

Because Merthyr is the birthplace of the industrial revolution, and the town where the workers’ red flag was first flown.

Something that passes a lot of people by is that the word Merthyr means martyr. Mer-thyr. It’s fitting when you think about how much the place, and its people, has had to sacrifice over the years.

Sacrificing our health, our livelihoods, even sometimes our lives to satisfy another’s greed.

Not far from here, in Vaynor churchyard, can be found the grave of the iron master Richard Crawshay. A man whose wealth was built on other people’s suffering. Aside from his name and dates, the only words on his gravestone are “God forgive me.”

He knew when he went to meet his maker how he would be judged.

Crawshay was one of a long line of people who have misruled and destroyed the economy of the valleys. It was true then and it’s true now.

Because today, an absent, ruling class has overseen the desolation of our workforce, long queues at the Job Centre and longer still at foodbanks.

We stand in Penderyn Square, named after Dic Penderyn who was hanged for his part in the Merthyr Rising. He maintained that he was wrongly accused of stabbing a solider. His last words before he was hanged were “O Arglwydd, dyma gamwedd” – “Oh lord, this is injustice.”

What would Dic Penderyn say if he were alive in Merthyr today, if he could see the destitution on our streets, the hundreds homeless, the countless struggling to earn a living,

Universal Credit. Sanctions for missing appointments. Not enough jobs to go around. Factories closing and no investment to take their place. Shops closed, shutters down, and no money left to keep the lights on.

But friends, looking back over these dark periods in our history, we see too that all was not lost in the soot and the rubble.

After all, diamonds are formed in the bowels of the earth under extreme pressure and heat.

They sought to define Merthyr in the muck of the mines. But they didn’t realise how diamonds are made.

Harri webb, a poet who spent many years living in Merthyr called this town the jewel of the valleys.

Well, diamonds are the hardest matter known to man.

They’re often exploited. But they are valuable, and shine in the darkest corners.

It’s true of Merthyr and it’s true of towns all over Wales who are realising that this is an idea whose time has come.

I see two futures stretching out ahead of us. One is beleaguered by inward-looking, wearing an imperial shame and searching all the while for a soul that was never ours.

The other future – sun-lit, with our sights towards the sky, and ready to take our place amongst the free nations of the world. Stop the world, Wales wants to get on.

I am glad that we are meeting here today. Because Merthyr is no longer synonymous with sacrifice. This is one of the towns where our future will be forged.

Because we in Merthyr have been tested in the furnace. We’ve been moulded in grit and fortified in iron.

Outward-looking, proud, and with a soul from the valleys of Merthyr and Rhymni , of Amman, of Gwendraeth, and Usk, of Idwal, of Ogwen, and Ffestiniog.

Let our voices raise to a thunder that echoes in Crawshay’s grave.